BoothPix in part owes it’s origin to the floods of 2009 in Cumbria.

Jon & Mags started BoothPix soon after, though the idea developed much earlier.
Up until that fateful November, the pair had owned an operated a retail shop in the town of Cockermouth. Whilst Jon also took on some commercial photographic work.
During which Jon had spotted the party photo booth industry exploding in the US, yet almost none here in the UK. Already using the right software for other photography work, the step into party booths made sense.
Then the floods hit, ending the retail trade for some time, and restricted their ‘own brand’ products wholesaling too.
From disaster to opportunity.
Using this as an opportunity, Jon set about building the first photo booth. Back then this was the only way to start!
BoothPix launched soon after.
Once starting, they found themselves travelling up and down the Country. Not only doing private events, weddings and so on, but for some of the biggest companies globally.
Growth
Since then Jon has become established globally as an industry leading expert and more recently set up an internationally focused trade show for photo booths. 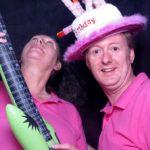